Brief summary, for those who aren’t up to speed:

We have been in Miramar Beach/Destin Florida for the past 8 days. It’s an annual family vacation with the Ledfords (Shauna, James, Carter, Audrey & Hudson) where we share a beautiful beach front townhouse. 50′ out the door and you are on the beach, 100′ and you’re in the water. It’s fantastic, a great family vacation that Sheila and the kids have been doing for many years … I’m a recent participant, this is only my 3rd year.

This past week the weather has been gorgeous, although the water is a bit sea-weedy from all of the storms pushing through the gulf and the normally extraordinary calm waters have some chop to them (but the kids love that, good boogy-boarding surf). Once you get out into the water about 75′-125′ off the shore line everything evens out quite a bit and its wonderful. 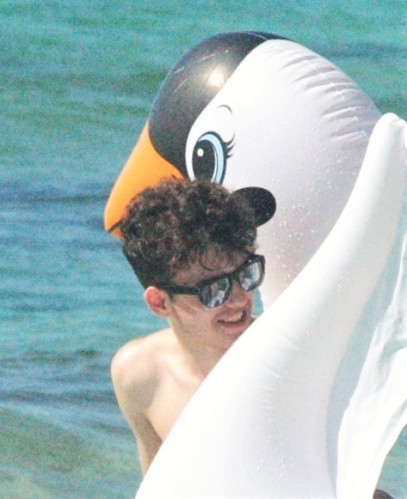 The Swan getting grumpy
Now, I was being good, trying to take it easy as any recent heart failure patient should. We found an inflatable swan left behind at the townhouse by other guests, which James inflated and the kids loved to try out in the water. As cute as that thing is, it’s brutal when the current is choppy and you’re trying to get on top of it. I realized that fighting with that crazy swan in the ocean might not be the best path for my health program, so I bailed out (well, bailed out after the swan completely capsized me, Audrey and Hudson). But, being truthful, I felt some unusual tiredness after fighting with that thing.

Two days later, I was out in the water for quite some time. BUT!!!, I had a float with me and I was just kind of paddling around, not over-exerting at all (or so I thought). After maybe a little more than 30 minutes or so, I came ashore and relaxed. But, again being truthful, I could feel some tiredness from the simple effort of paddling around in the water.

It was getting towards midday and Sheila had gone back up to the house to get on a conference call for work (have I mentioned how much I can’t wait for her to retire at the end of the year??)  I figured a few more minutes in the water wouldn’t hurt, so I grabbed the float and went back out for a while. I had just begun heading back towards the shore when an overwhelming exhaustion hit me. I couldn’t move my arms or legs in any type of coordinated movement at all. I was only about 6′ deep in the water, but my legs couldn’t stretch to feel the bottom (for those who don’t know it, I’m 6’5″ tall).

A pretty good sized wave kicked in and knocked me even further off-kilter than I had already become. Luckily, the float sort of stayed underneath me and I was letting the tide drag me back to shore. As I approached the shoreline the float gave way and rather ungraciously deposited me in the sand about 15′ from dry land.

Any of you ocean-going people know, that the last 15′-20′ before the shoreline is where the tail-end of the waves break. There I was, incapable of moving my arms or legs and tumbling around in the surf. Of course, my heart was doing some kind of weird thing as (I suppose) the CRT-D attempted to correct my heart beat.

Very luckily, Shauna was on the beach and came to my rescue. She, and other kind strangers, dragged me out of the surf and got me to the beach. I managed to catch my balance for a moment, but immediately collapsed again on top of a few beach chairs (major credit to Tommy Bahama chairs for being able to withstand some old fool crashing down on top of them).

Sheila was at the house through all of this, but after my heart settled down and I began to regain my muscle strength, Shauna made sure to scold me (“You shouldn’t have gone back out there”) in Sheila’s place. And once I got back up to the house, Sheila had a serious chat with me about pushing too far and my not accepting these new limitations dealt to me by my health situation.

I’ll admit I have been stubborn to a degree, particularly of late as I’ve begun to feel better and less tired. And while I’m very pleased with the progress I’ve made since my heart failure event, I do need to keep in the fore-front of my thinking that I’m not 30 years old anymore … I’m 68 and I have a bad heart that will never get better, despite having an electrical device connected to my system at all times.

Yup, it was reality check time down here in Destin Florida. It could have been a much different outcome if Shauna hadn’t been there, and while the thought of drowning in 2′ of water seems absurd, it could have been a real possibility.