How do they do it, these people that routinely interact onCraigslist, or Close5, or LetGo or even FaceBook Marketplace? How do they put up with the rampant stupidity of the potential buyers? For example:

While clearing out the Jersey house we had a lot of stuff for sale, cheap and in really great condition. Rather than paying someone $3k plus to come take it away, we put items for sale on FB Marketplace, Craigslist and LetGo. In our ad, because, you know, we communicate like normal people, we describe the item in detail and post pictures.

The first thing that happens is someone posts “Interested!” Okay … what does that mean, actually? Do you want it or not? And if so, can you get it by 10:00 am tomorrow like our ad says?

Then someone else … “Next”.

Next for what? Next to be interested? Can YOU pick it up before 10:00 am tomorrow?

And, of course, a few more people are “interested” and “next” in line for …whatever … but in the meantime I still have this piece of furniture in my house and I need it gone ASAP, that’s why it’s priced sooooo cheap.

I’m guessing that this is the new protocol of online buying, and that somehow declaring yourself “Interested” gives you right of first refusal. But where in this process does the criteria established by the buyer come into play? No offense meant to anyone who participates in this ritual routinely, but declaring yourself “interested” and then doing nothing further is idiotic. To extend the insanity a bit further, we conducted an estate sale to get rid of the household contents. Again, we advertised on FB Marketplace and various Craigslist groups … Whole House Estate Sale, 1st come, first served, a list of some of the important things that were up for sale, a specific statement that some of the stuff in overall room pics was not for sale, hours of the sale, etc.

Some guy writes “Interested in the electric fireplace”. We have two electric fireplaces in the house, one which was sold to the new home buyers and a small one, the one referenced in the ad. And the ad says, 1st come, 1st served, no holds, items must be immediately removed. But this guy is “Interested”, no other info, just that … Interested.

Comes the first day of the estate sale and we are jammed with people. About an hour before we were supposed to be finished for the day the “Interested” guy walks in and wants to buy the large electric fireplace. I tell him it’s not for sale, and that the little one was already purchased.

He was really irritated, told me it was “owed” to him because he claimed it first. Really? I said “it’s not for sale, it stays with the house. The ad said small fireplace, not the large one”. The ad also specifically said that the large one was NOT for sale. But that was not good enough for this nut, he wouldn’t let it go.

Now, after a solid year in peaceful Georgia, I’m a pretty calm guy. But my inner Jersey got the best of me. I told him, “Here’s what I’m going to do … I’m going to stop the house sale, tear up the contract, all so you can have this fireplace! How’s that sound?” He said, “you don’t have to be so snotty about it” and walked out with about a dozen little things he had picked up off of the “free stuff” counter …

Can anyone tell me why the phrase “interested” has become so powerful? ‘Cause I’d like to use it on Sheila now and then if it actually works!

The estate sale was pretty successful, with most of the stuff either being purchased at crazy cheap money or given away for free. My goal was to empty the house, far more important to me than making a few dollars, so if I had to give it away then so be it. A sofa and love seat that was purchased at Raymour & Flannagan at the end of 2015 originally cost about $2200. It was only used for about 4 months and basically just sat there until the estate sale … I sold that for $125. Yup, big loss but I had to get it out of the house and only had 1 weekend to do it. Lots of other stuff was sold equally low priced, or in many cases, given away free.

It was successful (the goal of emptying the house, that is) (successfully lost money on perfectly good stuff, too) and by Sunday the house was empty except for a dining room hutch. It was a nice piece of furniture, Italian made and originally purchased in 1995 or so for about $1400. I was selling it for $25, but no takers. By Sunday I was giving it away for free, still nobody interested. Actually, that’s not true … lots of people “interested”, but no one ever came by to pick it up.

After 2 days of “interested!” and I’ll-be-there-after-work lies, I put the hutch on the front porch so I could finish the house cleaning. It was now 1 day until the closing and I had no room in my SUV to put this thing since the car was loaded with a LOT of fabric left over from Bunny’s studio … Sheila (also a big time fabric person) wanted me to bring the fabric back home, so I had the car filled up (there is now a fabric explosion in Acworth GA).

I couldn’t take the unit anywhere by myself, and the best option was to hire a moving company with a small truck to take it to a donation center. The moving guys were $65 an hour and I had to guarantee that where ever they delivered the unit it would be accepted. The local Goodwill (East Brunswick NJ) did not take furniture, Salvation Army wouldn’t take it without inspecting and they were 4 weeks out in their inspection schedule, and a few other places couldn’t guarantee that they would accept it without looking at it first. I was stuck.

Sheila suggested I put an ad on Craigslist stating “free hutch + we’ll give you $20 gas money” … that did it, and finally, on the day before the closing, I  no longer owned any thing that resided in the State of New Jersey. It felt completely freeing! 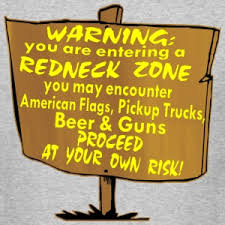 Speaking of my time in Jersey, while up here for the house sale and closing I needed to go into New Brunswick to get some county documents related to the sale. New Brunswick is the home of Rutgers University and it’s also the county seat, so the traffic is horrible and there is always a huge problem finding parking.

While doing the circle dance around the block looking for a space, a guy behind me was getting annoyed and trying to pass me. When he finally did get next to me he lowered his window and yelled “Go back to Georgia you red-neck a**h***!” I couldn’t help myself, I was laughing so hard at that, which really angered this guy, causing me to be the recipient of even more Southern-biased slandering that I can’t repeat here. It is amazing how the mere presence of a Georgia license plate evokes such a tirade!

The closing was a gigantic PITA … the buyers were really, truely, 100% jerks, making demands right up to the very last minute. One of the stupid things they were complaining about was a remote sensor on the front porch that turned on two lights … one of the lights didn’t come on during the walk-through and they wanted me to give them $200 to get that repaired. I’m sure it was simply a burnt out light bulb, but they were carrying on like it was a major electrical system failure.

It wasn’t until I told my agent to “tear up the contract and cancel the sale” that the buyers finally, mercifully, shut up. The lender used by the buyers had all of the check amounts wrong, so we had to wait until wire transfers were completed with the corrected amounts. My agent was useless and I was ready to choke her, too. It was not a fun experience, but at 2:30pm on November 2, 2017, the deal was done!

I was on the road at 2:45 pm and drove straight through, arriving home at 5:30 am the next day (well, I did stop for gas when necessary and also took a 45 minute quick nap), where Sheila was waiting for me with a cup of coffee and two dogs bouncing around. I’m really glad to be out of NJ once and for all, and REALLY glad to be home!

The Trio – How High the Moon