Let’s get serious for just a moment … everyone knows that you can leave Jersey but you’ll never get rid of the internal Jersey. You know, that overall snark that becomes part of your DNA when you’re born and raised in the Garden State, that aggression that stays with you even after you’ve mellowed out, the “don’t mess with me, I’m from Jersey” stink eye you give people who are trying to pull a fast one on you.  That stuff never, ever goes away. Sure, maybe it gets a little dormant and repressed when you’re surrounded by pleasantness and relative contaminant-free breathing air, but it’s always there.
I was living here with Sheila for about 2 months and she mistakenly assumed that I was a very calm guy. Hey, I’m living with a pretty lady in a beautiful home in Georgia … of course I’m calm! Or, at least I was until I got the third marketing phone call in one day for a warranty extension on a piece of furniture I bought from Ashley that I had to THROW OUT ON THE CURB because it was so horribly made and they were such a pain in the butt to deal with (no lie, threw it out on the curb after 3 replacements over 6 months). When warranty call #3 came that day, my Jersey erupted and much loudness/profanity/angst ensued.

So that was the first day Sheila programmed the sheriff’s phone number into her speed dial … she didn’t know what to make of the outburst from her new life partner, or the immediate calm that returned after the eruption. “Just part of my Jersey charm”, I informed her, “nothing to be concerned over”.  “But you were so loud and red-faced, how can you be so relaxed now?” “It’s just my Jersey leaking out”, I said.  You Jersey people know exactly what I mean.
Last week I was up in NJ at my house in Spotswood, taking a few days to go through everything and see what it is that I wanted to keep. My new home/life here in Georgia with Sheila is quite complete, and in reality, I need nothing whatsoever. Most things that are important (paperwork, passport, tax records, etc.) are already here with us; anything that was still in Spotswood had questionable value … if I hadn’t needed it for the past 6 months, did I really need it at all?
Two pieces of furniture were still up north that Sheila really liked (a secretary and matching coffee table, nicely hand carved oriental style stuff and worth some coin, too), along with books and records and photos that I knew I would regret tossing out at some point in the future. Plus, Sheila is like a book fairy godmother, protecting anything with a binding from miscreants like me, so there was no way I was leaving that stuff up there. And a refrigerator, which is only two years old with about 6 months’ worth of real time usage … may as well bring that down, too, since our fridge here in GA is getting a bit old and has some minor issues starting to crop up.
After checking with commercial movers and realizing that the cost to move this piddly amount of junk would be over $3K (minimum billing for such a trip), I decided to rent a 12’ truck from Penske, load it myself and drive back to ATL. I was able to enlist the help of two of my brothers, Buzz (the oldest) and Frank (the youngest), along with Frank’s wife, Jill. Sheila was staying in Georgia with family issues, plus someone had to look after these two knuckleheaded dogs we have. And it was just a small amount of stuff, right?
The flight north? Flawless. Renting the truck? Perfect. Getting stuff packed up? No issues. Moving the fridge to the truck? O—M—G *!#%!*^$#%!!! 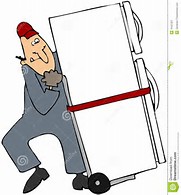 This thing weighs 330 pounds … you would think I would have looked at that little piece of info before deciding to do this, right? You have any idea how heavy 330 pounds of bottom loaded dead weight is, especially when you have two older-than-dirt guys and one starting-to-get-broken-down guy moving it? With no ramp or liftgate on the truck?
Don’t get me wrong, Buzz, Frank and Jill were a tremendous help with everything. But Buzz is 4 years older than me (and I’m soon to be 66) and Frank is pushing 58. (There are 6 Goode kids … Buzz is the oldest, then 4 years went by while Mom tried to recover from the trauma of giving birth to him, then in every two-year order after me once Mom saw how perfect a child I was, me, Tom, Mike, Barb, and Frank). Here were the oldest, and 2nd oldest, along with the “young one”, moving this 330-pound behemoth that wouldn’t fit through the doors without random dismantling of parts and mucho Jersey expressions of malcontent.
Of course, the absence of either a tailgate or ramp meant trying to lift this moose straight up with about ¾” clearance (you’d also think I would have given a bit more thought to that as well, wouldn’t you?) … that wasn’t happening, not with the crew we had available. But we already had the piece of junk at the truck, what do we do?
A quick review with Professor Google showed we could lay it on its side, if I let it stand upright for a minimum 24 hours before plugging it in, to allow the Freon to settle. That settled, it went on its side and into the truck, carefully protected with comforters on the floor of the truck to protect from scratching. And Sheila, God Bless her incredible soul, had contracted some local muscle to unload the truck in ATL.
The trip back to GA was uneventful … the truck was great, relatively fuel efficient, nothing shifted from where we packed it in, books saved by their patron saint, furniture secured with zero damages, replacement fridge inside for its damaged ATL cousin, and young able-bodied men moving it all. I was feeling pretty darn good about everything, figured I might even score some bonus points with Sheila based on the book rescue (hey, I take the credits where I can …)
Everything is in place, and 24 hours later I’m plugging in the fridge. A little prayer, and wham!  Fridge is powered up and lights are working and compressor kicks on. Press in the water dispenser bar, and wow! Water spurts a bit, gets the air out of the line and there it is, water in the glass. Right about then I was letting my Jersey cockiness air out a bit, show you that you can’t hold a Jersey guy back, everything is working and I’m thinking maybe I should chat up Sheila a little bit since things are going so darn good!

“Why is there water on the floor by the freezer door?”, asks Sheila in her beautiful southern charm way. Southern ladies never say what they mean, out of sheer politeness, although I’m sure Sheila was thinking, “Hey, there’s water on the floor, did you break something?”
As soon as I heard Sheila’s question I had flashbacks to the freezer door dangling off the hinge as we wrested that pig out the door in Jersey. Yup, I’m sure that was the moment we damaged the water line, which runs through the bottom freezer hinge and up into the ice maker. Realizing chatting up Sheila was now a faded memory, I got my nearly 66-year-old self onto the floor to confirm that I was going to be screwed, and not in a fun way, either. Yup … screwed …
Y’all know the rest of the story without having to read it … GE repair comes by, confirms that I am, indeed, screwed and as an added bonus to my screwed-ness advises that the only way to repair the line is to replace the entire freezer door for a final screwing of $910.84. Yup … thoroughly screwed …
As of this writing, here is where I am … two refrigerators, both with the same identical common problem of the ice maker/water dispenser not working, both of which weight more than a ’54 Chevy, I haven’t told Sheila yet (she is at work today), I still don’t have any ice water (although I’m considering a steady diet of Scotch) and I’ve spent the last few hours realizing that all of the effort involved in moving that thing down here will only result in me buying a new fridge (I am NOT paying $910.84 for a new door … it’s a nice fridge, but it’s just a GE, not a SubZero) (and it’s something I should have done in the first place instead of being cheap) and leaving no fridge in the house I’m selling in Jersey.
Lessons learned:
Anybody want two refrigerators? You’ll have to come and get them yourself, though …
You can subscribe to my blog by logging in at the link provided for desktop viewers at the top of the blog, or by sending a “Subscribe” message to egbassga@gmail.com for mobile users who cannot view the link at the top of the blog.