Sometimes you can just smell the stink of impending failure permeating the otherwise pleasant bouquet that is your life. Such is the case with my upcoming trip to Jersey to begin the process of closing down the Spotswood house and getting it on the market for sale. What, on the surface, seems like a relatively simple thing has the potential to be a real cluster ****
Before anyone gets all carried away with themselves, particularly the Debbie-downers who have been (im)patiently waiting for this Georgia relocation plan to fail, everything here in Sheila-land is beyond wonderful. Amazingly, Sheila has put up with whatever infectious crazy foolishness I’ve introduced, to the point where she actually SUPPORTS my nutty ideas. (I think Sheila may have a few loose screws herself) (But I do see her shaking her head more often these days)  For anyone expecting this life change to crash, sorry to disappoint …
Here’s where we are right now … 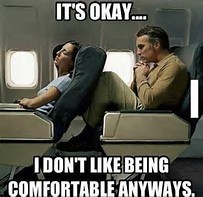 In three days, I’m flying into Newark (yes, in first class … it only costs $79 more) (I’m 6’5”, I’m not sitting in coach between a fat sweating guy and some chick with nose rings trying to sleep on my shoulder) (no offense intended to nose-ring wearers everywhere) (definite offense to fat sweating guys, though … eat a salad once in a while, ‘ya porker), then renting a Penske 12’ cube van truck. The 12’ truck will be my “ride” while up in Jersey … this can be compared to my fancy-pants Lexus … but isn’t really suited for casual driving. I’m getting the truck because I need to bring only a few things back here to the ATL (yup, I’m sticking with “the ATL” from now on when describing the greater Atlanta area) and the cost to have a common carrier/mover handle these few things was brutal.
In fairness, I realize I’m being quoted minimum billing to move my junk from Jersey to Georgia, so I’m not mad at the excessively high quotes I got from movers, but I’m also not completely stupid. It’s cheaper by nearly $2k to fly up, rent a luxurious 12’ truck and drive it back down myself. Not as nice as flying in first class, but it’ll have to do.

And what is this treasure trove that I have to move to Atlanta (oops, sorry, I forgot) the ATL, you ask? Here’s my list of “Stuff to Bring Down”:

And that’s it, aside from some miscellaneous stuff hanging around … a cute fruit holder thing, a big cutting board, some paintings/pictures, a Mighty-Mite bass neck, a double bass case with wheels, a portable AC unit for Sheila’s sewing room upstairs which gets HOT at times even with the central air on full blast, some other small stuff … not much.
So far.
And that’s where this master plan can turn into mush; once I start looking around, will I be able to just leave it? To be honest, Sheila’s (and, now, mine, too) house is big, certainly bigger than anything I’ve ever lived in, and while she has it loaded up good with cool vintage-y art deco items there is still ample room to shove my Jersey “could be landfill trash” into the house without making too big of a mess. The thing is, why would I want to do that? Do I really need yet one more set of towels here in Georgia, particularly since Sheila could easily re-stock the local Hampton Inn in the event of a towel emergency? No, the answer is, “no”, keep the Jersey stuff in Jersey.
My idea is to have an estate re-seller come in and liquidate the home, just sell off whatever is left over after my 12’ cube van loadout. The shame of it is that Sheila could do that, easily, since she has very good chops with stuff like this. However, we’re here in the gorgeous South and she isn’t going to be spending the summer selling off my crap in Jersey. Why spend time in Spotswood NJ when we look at this every single day? 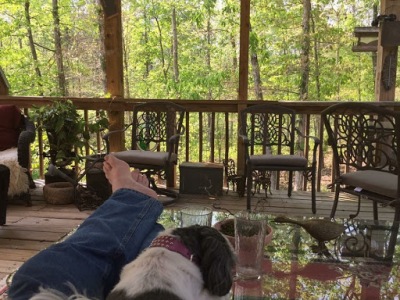 What I am planning on doing is keeping Sheila on speed-dial (she’s not coming up, somebody still needs work around here) so she can keep me on track. Sheila has that polite Southern way of letting you know you’re an idiot without actually saying the word “idiot” so hopefully she’ll make sure I don’t do anything dumb. A simple “I don’t think that’s a good idea” from Sheila is more than enough to stop me in my tracks, just like she did the other night when it was raining and I suggested we get a couple of drinks, sit on the deck and see what happens has done many times over.
It’s odd to look at possessions you have lugged around for most of your adult life and realize that they really no longer have any meaning to you. That weird little bud vase, where did that ever come from in the first place? And why was it kept for so long? And that plate with the small chip out of it that acts as a tray for one of the plants … really? Keeping a broken plate? I vividly recall moving that plate with the plants and thinking, “What in the world am I carrying this piece of crap for?”
Becoming a widower, meeting a new life partner, retiring, moving … all significant events by themselves, perhaps a touch overwhelming taken as a whole group but the impetus for me to look at things and realize that, yes, that bud vase is really not attractive and the chipped plate is just a chipped plate, not some treasured memory. It’s just stuff and it shouldn’t be hard to let it go … as long as I keep Sheila on speed-dial …

1 comments on “Anticipation? or Anxiety?”