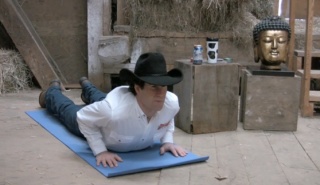 Sheila is gone, departed for Brownsville, TX for the week. I usually take the trip with her but we decided we would hold onto our dog-sitting favors for a real vacation and not blow it for the sake of Brownsville, TX. So, for the first time since we became an “us”, we’ll be apart for several days. This led me to think about some things that, hopefully, never cross Sheila’s mind while she is away.
We have done some yoga together, Sheila and I, and the results of this effort are exactly what you’re all thinking right now … ugly, ugly, ugly. (On my end, not Sheila’s) (She is very bendy, I’m the exact opposite). I found this meme online that totally depicts our yoga together: 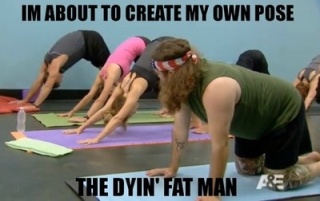 I can’t do the most basic stuff without getting a cramp in either my legs, arms or back, so I end up just kneeling (yes, like the guy in the picture) for the entire 40 or so minutes we do yoga together. Sheila is splayed out on the floor like an amphibian, everything looking perfect and pretty and bendy while I just kneel there. When it comes time to change a pose, I shift my weight to alleviate the cramping while Sheila gets into whatever impossible pose is next and I re-assume my kneeling position, praying that the cramps don’t return and eternally grateful that none of my brothers can see this disaster unfolding (not that they’d do any better, no way, those characters are lucky they can walk in the upright position) (my brothers all look like the middle guy on the evolutionary chart).
I made darn sure that there was no yoga-ing going on before Sheila left. The last thing I want is THAT image sitting in her pretty noggin while she is in Brownsville, TX, surrounding by hunky cowboys. Before I dropped her at the airport I did my very best to look as good as possible and try to leave her with the impression that I was NOT like my caveman brothers and that I was worth coming home to without carrying a copy of “Cowboy Magazine” in her suitcase. I wore a fancy Tommy Bahama shirt and Horsetown jeans, too, in the attempt to look suave (if you don’t understand the Tommy Bahama and Horsetown reference than you need to do some reading and catch up) (of course, that assumes you’re still reading this mess right now).
Speaking of Tommy Bahama shirts, I’m VERY happy to report that my eBay purchases arrived without the dreaded pit stains or any other evidence of bodily fluid secretion. Just keeping y’all up to date on the minutia that is my life …
As spring arrives here in the greater Atlanta area, Sheila has been unearthing clothes appropriate for the season. She is a big-time dress wearer and looks wonderful all the time, and this seasonal change has prompted a major fashion show as assorted sun dresses and different tops are displayed for me … but certainly not looking for my approval since it’s evident that I have zero fashion sense. In “Sheila World” this hunt also reveals assorted items that need some level of attention; “I found this old porcelain lamp shade that would look beautiful hanging in the lower staircase going into the music area, we just need to find a piece of rubber or something to stick in the top so we can put a fixture in there and run the cord around the column at the bottom of the staircase and we can put a remote switch on it so we can see better when we’re going downstairs and that way no one will trip”.
Now, not many of you know Sheila that well on a personal level, but those that do know full well she would never use so many words to express her thought. What she actually said was, “This lampshade would look great hanging in the staircase” … the rest of that I just extrapolated in my dim-witted brain. 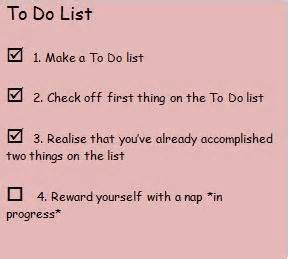 With Sheila gone these next several days I have created a list of “to-do’s” that arose from the recent fashion show. And a lot of these things are on the fringe of my limited skill sets, and this is where I could really use my brothers being closer. Those guys are all mechanics, electricians, carpenters with, you know, usable skills. I’m the family disgrace, a friggin’ musician for Heaven’s sake. But no, they’ll just leave me hanging down here in Georgia while Sheila is in hunky cowboy land, expecting that many “to-do’s” will be “got-done’s” when she gets home (hopefully without the “Cowboy Magazine”).
Now, the thing is, Sheila has NO expectation of anything, this is all crap that I have created in my mind. When she reads this she’ll just be shaking her head, wondering where it all comes from. I better get some stuff done so she doesn’t have time to head-shake or wonder …

This past Saturday before Sheila left I had the first rehearsal of my newly formed jazz band at the house. It was just the initial get-together with a female vocalist and a keyboard player, and me, trying some tunes out for size and seeing if all of our personalities mesh. Sheila is crazy supportive of my musical aspirations and was her usual welcoming self. Of course, since we were having people over, she was worried that the house was clean and tidy … I tried to explain these were musicians and that clean/tidy didn’t apply to them, but it made no difference. Our already clean and tidy house was made clean-ier and tidy-ier and Sheila was a superb hostess.

This made me realize that I needed to be more proactive in the daily care and maintenance of the house. Now, in fairness to me, I do nearly all of the cooking and food shopping, along with the daily dishes getting cleaned and a good amount of the laundry. I think it’s only fair, since Sheila still works a full-time job and I sit at home all day writing blather like this. But even so, I can do better and I hope that when Sheila gets home (sans “Cowboy Magazine”) she thinks, “Wow, this old guy kept the house up pretty well while I was gone, maybe I’ll let him hang around here a while longer”
Of course, Sheila never thinks about stuff like this, it’s just more junk I make up in my head. She’ll be thrilled to just get home to her comfy bed and see the two knuckleheaded dogs without being concerned if the frying pan is in the right cabinet.
I found out this past week that the neck on one of my basses is shot, the truss rod (a steel rod inside the neck that is used to make intonation adjustments) is completely maxed out (can’t adjust it any further) so the bass is essentially now wall art. Of course, it doesn’t really matter since I usually don’t play 5 string basses much, and this particular bass was the heaviest one I’ve ever owned checking in at 14+ pounds (yikes!!!), but even so, it is pretty and sounded sweet.
So, to make up for it (or so I justify these things to myself) I bought a new (used) amp that I’ve always wanted but didn’t want to pay bust-out retail for it … a Phil Jones Bass Briefcase amp, so named because it’s about the size of a fat briefcase. The PJB amp is amazing technology with 2 little 5” speakers that you’d swear would never work for a bass, yet it sounds big and full and is plenty loud enough for the average rehearsal or small gig. Just incredible how efficient this current technology has become.
So now, in my current state of retirement, I find that I own 3 double basses, 8 electric basses, 4 bass amplifiers, a PA system and more miscellaneous junk than I care to think about. And there is every likelihood that I’ll own a set of drums in the very near future, too. This way I can finalize the set up in my music area so rehearsals can be handled with a minimum of disruption as musicians enter and exit the house. I’m sure Sheila never expected to be inundated with all this junk when we first decided to co-habitate in this beautiful home she created here in Georgia, but she is crazy supportive of my musical goals … I only hope I can live up to those expectations!
When Sheila gets back from Texas we will be preparing for the family Easter dinner on Sunday. We had a great family dinner on Christmas Eve and I expect that this will be just as cool (Sheila is VERY good at these things!), really looking forward to having everyone here! Happy Easter from Sheila and me to all who celebrate the day!