Sheila was going through closets and getting out her spring clothes when she found two Tommy Bahama silk shirts that her husband, Frank, had purchased before he passed away. Frank was a much, uh, trimmer guy than me so it was surprising to see that he had shirts sized XL. But I assumed he had found them for a great price (probably at a time when he was a little bit heavier than his usual fit self) and rarely wore them, so it was perfect for me.
And I need to get my wardrobe straightened out … I have lost a fair amount of weight over the past year (about 100 pounds) (yes, I was a fat bastard) and I have been slowly getting new clothes. Sheila, who knows about stuff like this, has been great in helping me find the right kind of clothes. Of course, a lot of the help is in the interest of making me look acceptable and not my usual embarrassing self (Sheila always looks perfect) (even when she’s just hanging out around the house).
Now, a Tommy Bahama shirt was just the thing I needed Sunday morning … we were going out for brunch with our friends Brenda and Martin to a place called Copeland’s, a nice restaurant in the Atlanta area that has a jazz brunch every Sunday. Brenda and Martin were the very first “non-family” people I met when I moved here to be with Sheila and they immediately made me feel welcomed. Sheila and Brenda have been friends for a very long time so I always try to not be so “Jersey” when in the company of Sheila’s circle of peeps. And dressing in something other than old Dockers and a quasi-faded LL Bean shirt that are both too big for me was a good place to start.
In addition to the Tommy Bahama shirt, I was also wearing a new pair of sorta dressy dark-wash jeans that I had just bought at Horsetown … yes, Horsetown … a cool cowboy attire shop here in the Atlanta area. Horsetown has more jeans than anyplace I’ve ever seen, as well as a ton of western/southern style shirts, hats, boots, jackets and everything a style-conscious Georgia boy/girl could want. And the staff is amazingly knowledgeable, making sure that the clothing you buy fits right. 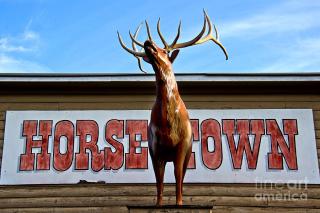