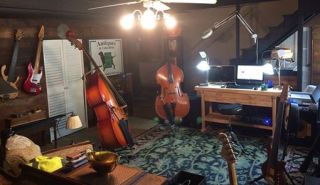 Just about 1 month now since we (Maddie & me, that is) “relocated” to Georgia … funny, it doesn’t feel like a relocation, it just feels like we came home to where we belong. Nothing is uncomfortable, nothing feels strange, it’s as if we have been here for a very long time. Madison seems completely at home, to the point where she is now being her usual demanding pain-in-the-ass self. At first, Sheila was buying into Maddie’s sympathy ploy but she quickly caught on to the sneaky wiles of a little dog and Madison is no longer able to blow a smoke screen at Sheila. Nice try, midget dog, but the jig is up ….

I have a really nice area for my music stuff. The pic above is my new work space, with plenty of room for expansion as things get started. My first official Georgia music thing takes place tomorrow with a new piano player and drummer and I’m hopeful that it will be the start of some good playing. I’m planning on trying to record the session and if all goes well maybe I’ll get some stuff up online.

Sheila is a HUGE supporter of my music … she actively encourages my somewhat bad habit of “bass acquisition” and we now have a new addition to the bass collection, a formerly owned bass that has returned to the flock:  FBB #043, a fretted 5 string lacewood/curly wave maple over butternut with active electronics. It’s a really good bass that I never should have let go in the first place. Not too sure where I’ll use it, but it sure is pretty!

I’ve been working part time for AWT, my employer for the past 19+ years, doing stuff remotely from another “new-to-me” office here in Georgia. This work space is very comfortable and well segregated from the rest of the house, plenty of space and quiet for a lot of the writing I do for AWT. It’s been working out well and I’d guess we’ll have some sort of arrangement with AWT over the next year or so. Here’s my “new” office area, it’s actually quite bright and open although it doesn’t look that way in the pic. 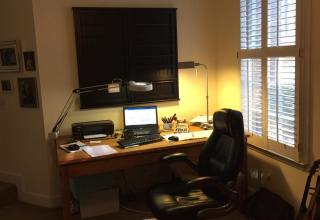 Sheila and I went to Jersey this past weekend for my niece Katie’s post-wedding party (Katie & Mike were married in Aruba in October … Sheila really wanted to go to Aruba but we had some family issues to attend to and couldn’t make it) in Berkeley Heights at a cool place called Maskers Barn. Sheila met a pretty good chunk of the Goode clan in one shot and did really well in remembering most everyone! Plus, she didn’t ask me to pack my bags and get the hell out of Georgia, so I guess my sibs didn’t scare her too much. Here’s the requisite “group” photo (Sheila is in the back next to me, she’s the one with the shell-shocked look in her eyes) (the general “zombie-esque” look is related to the camera quality) (this isn’t even close to the full contingent of Goode’s, maybe only 1/3rd) 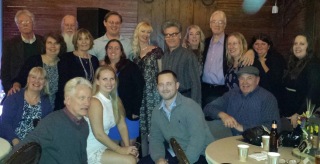 Sheila also met some of my very close musician friends (Vinnie/Marilyn, Bill/Julie & Joe/Angelica) at a nice “getting to know you” party that Vinnie & Marilyn set up for Sheila. That was a really nice time, the food was great and it was a clear reminder to me that one of the very few things I’ll miss about Jersey is the opportunity to be able to play with these great musicians … they have been good friends as well and their welcome to Sheila is really appreciated! Great love and thanks to both Vinnie & Marilyn for their on-going friendship …

I’m saving some of the chuckles regarding the installation of a dog door and other “home remodeling” for the next blog post … for those that know me, suffice it to say that when I hacked open a hole in the side of Sheila’s house to install a dog door (because, you know, why put the dog door in a door when you can completely destroy the side of a house?*!#*%!?) it didn’t go too well …and other clear demonstrations of my obvious lack of handy skills. Stay tuned …

But the super cool thing is that I’m now “home” in every sense of the word. Being down in Georgia, being with Sheila in this beautiful house, getting to know new people, making new contacts, starting a new life, realizing that all of this isn’t some dream that will come to a crashing awakening … I have been very lucky, indeed, and I’m forever grateful for all of the cosmic forces that lined up to make this all possible!